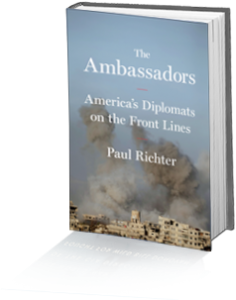 The Ambassadors is the story of the small circle of top career diplomats who led American missions in the greater Middle East through war and revolution in the years after the 9/11 attacks.

Presidents and secretaries of state turned repeatedly to seasoned Middle East hands to serve as their chief troubleshooters and primary links to countries on the edge, from Iraq and Afghanistan to Libya, Pakistan and Egypt.

Diplomats are usually imagined as placid palace-dwellers in striped pants. These ambassadors were called on to be statesmen, warriors and nation-builders. Their foreign service peers admired them as the best people for the worst places. Though they were unknown to most Americans, they served as a crucial line of national defense.

The book paints vivid portraits of four of them. Ryan C. Crocker, a six-time ambassador, was dispatched to Afghanistan after the 9/11 attacks to help organize a new government. Over the next decade, two presidents sent him back to Iraq and Afghanistan as ambassador to find a path between warring factions that would allow U.S. armies to come home. Anne W. Patterson, a veteran of Latin American drug wars, was sent to Pakistan when American officials considered it the most dangerous country in the world. She brokered deals that kept fragile governments from collapsing to political crisis or military coup.  Robert S. Ford served more time in Iraq than any other foreign service officer, then, as ambassador to Syria, stood up to a dictator who was slaughtering his own people. J. Christopher Stevens,a diplomat with a gift for making friends, became the most well-known expeditionary diplomat when he was killed during a terrorist attack in Benghazi, Libya, in 2012. Washington politicians fought over who was to blame for his death, but diplomatic veterans saw Stevens as proof that the job cannot be done right without risk.

The diplomats were part of a proud tradition of Mideast specialists in the State Department. In recent decades the Near Eastern Affairs Bureau had more than its share of the department’s most important work. Insiders considered it an elite club that admitted only the best.

The Ambassadors goes behind the curtain to explain how American diplomats deal with states in war and civil crisis. It often looks little like what is disclosed in official pronouncements.

In the years after these ambassadors ended their service, the foreign service saw its numbers shrink and its influence decline. But their stories attest to its contributions.